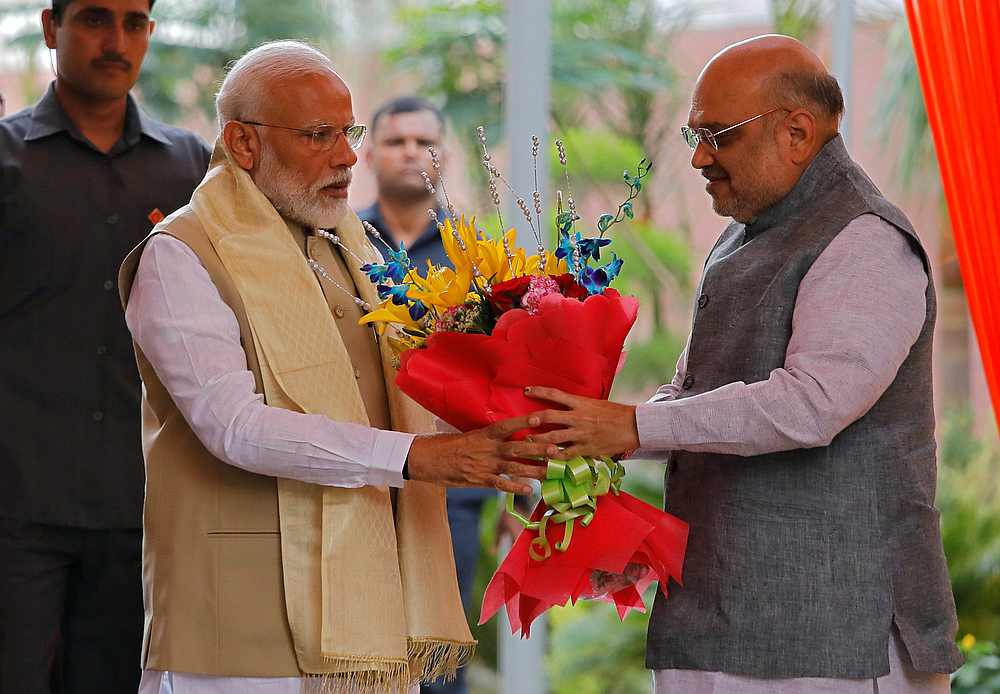 New Delhi: Prime Minister Narendra Modi on Thursday led his Bharatiya Janata Party towards a stupendous victory for a second term in office, as his message of nationalism, security, Hindu pride and a New India was wholeheartedly embraced by voters across large swathes of the country.

With the elections establishing the 68-year-old Modi as the most popular leader in decades, the partial vote count released by the Election Commission showed that BJP will surpass its 2014 performance, and will likely cross 300 seats.

Until 6 pm, the BJP had won 26 seats and was leading in 278 of the 542 Lok Sabha seats that went to polls in seven phases, demolishing the combined Opposition with the Congress Party stuck with seven victories and a lead in 43 seats, according to trends.

Modi himself was leading in Varanasi with a margin of over 4.3 lakh votes while party president Amit Shah was ahead in Gandhinagar in their home state of Gujarat by over 5.5 lakh votes.

“With development for all + everybody’s confidence = victorious India,” Modi tweeted. “Together we grow. Together we prosper. Together we will build a strong and inclusive India. India wins yet again,” he said.

In almost all states where BJP won, its vote share was more than 50 per cent. The results have raised questions about Gandhi’s leadership and his party’s future. At a press conference, Gandhi refused to address that issue, saying the party would hold a meeting on Friday to discuss the future. “The people of India have decided that Narendra Modi will be the PM again and I fully respect it,” Gandhi told reporters.

He also congratulated Modi and BJP, adding that today was not the day to go into the cause of the defeat but to respect the will of the people.

If the trends stay until final results, the BJP and its allies in the National Democratic Alliance will likely end up with 344 seats, up from 336 in 2014. The BJP, which is now tantalisingly close to the 300 mark in Lok Sabha, had won 282 seats on its own in the last election.

The results are a ringing endorsement of Modi’s popularity, his government’s achievements in the last five years and his campaign, which centred around national security following the Balakot air strikes, nationalism and Hindutva. He also relentlessly attacked the Congress Party for what he called its dynastic legacy, and blamed it for the country’s woes, including endemic corruption.

The Opposition had criticised the BJP campaign as divisive and polarising. Still, trends show that the Modi wave and the party’s brilliant election management swept across geographies, caste lines, age, gender and economic status.

In the politically critical state of Uttar Pradesh, where the Samajwadi Party-Bahujan Samaj Party combine had posed a stiff challenge, the BJP had won two and was leading in 59 of the 80 seats at stake. The SP was ahead in six and BSP in 10. Although the BJP had won 71 seats in the last elections, the performance is much better than what many exit polls had forecast.

The BJP state headquarters in Lucknow was drenched in saffron hue with jubilant party workers wearing saffron stoles, adorning ‘genda’ flowers around their necks and holding lotus cut outs. They also burst crackers and danced to drum beats as women supporters wore saffron attire and painted their nails in the same hue.

In a stark contrast, Congress, BSP and SP offices wore a forlorn look. Under the scorching sun, even shop owners selling campaign material outside the SP office sat in stunned silence as those gathered around the tea kiosks talked in hushed tones.

The Congress Party was ahead only in one seat in Uttar Pradesh. Even Gandhi lost his seat in Amethi to BJP’s Smriti Irani.

He, however, was on course to win Wayanad in Kerala. “Congress party is feeling dejected and the trends are not in line with the expectations of the party. I would not jump to the results till complete counting has taken place,” Congress spokesperson Jaiveer Shergill told reporters. “If the trends hold, then Congress needs to introspect as to why its campaign failed to resonate with the people of the country,” he said.

The Modi wave not only swept through the Hindi heartland and Gujarat, as was expected, but also rippled through West Bengal, Odisha, Maharashtra and Karnataka. Only Kerala, Tamil Nadu and Andhra Pradesh appeared untouched. Even in Telangana, where it was expected to fare poorly, the BJP was ahead in four seats, the same as the Telangana Rashtra Samiti.

However, Andhra Pradesh threw up a shock in the Assembly polls, which were held simultaneously, voting out of power the Telugu Desam Party of Chandrababu Naidu, and electing Jagan Mohan Reddy’s YSR Congress.

After Jawaharlal Nehru and Indira Gandhi, Narendra Modi is the third prime minister of the country — and the first non-Congress one — who has been able to retain power for a second term with full majority in Lok Sabha. The results were staggering for BJP in the Hindi-speaking states, including those where Congress had won in the recent Assembly elections; in Madhya Pradesh, BJP was ahead in 28 out of 29 seats with a vote percentage of nearly 60; in Rajasthan it was leading in all but one of 25 seats; similarly in Chattisgarh, BJP was ahead in nine compared to Congress’ 2 seats. The BJP is expected to take all 10 seats in Haryana.

“The people on the ground are not buying the narrative of the Opposition that people are under threat. People are doing well that they are looking forward to the next government of Narendra Modi. We have to realise that Modi’s government inherited very weak economy and he done very phenomenal job (in the last five year),” BJP’s Amit Malviya said.

In Odisha, the BJP made huge gains, forging ahead in six of the 21 seats while the Biju Janata Dal was ahead in 15. In 2014, the BJD had won 20 seats and BJP took one. Odisha also held simultaneous Assembly polls, in which the BJD is set to return to power, indicating that the voters chose smartly, opting for the status quo in both state and centre.

BJP and its ally Janata Dal (United) were ahead in 16 seats each in Bihar out of 40 at stake. The Trinamool Congress Party was leading in 23 of 42 seats of West Bengal while BJP was ahead in 19, up from two it held in 2014. The Left was wiped out in the state, once its citadel. The DMK was ahead in 20 seats in Tamil Nadu while the AIADMK was leading in only two. In Kerala, the Congress-led UDF was ahead in 19 out of 20 seats. As the trends came in, pointing to another tenure of Modi as prime minister, celebrations broke out in the BJP’s party offices across the country with people dancing to the sounds of drums and distributing sweets. The trends of the ruling party’s leads were in sync with the exit polls, most of which predicted that the NDA would be on course to retain power for a second term.

The counting exercise is on in over 4,000 counting centres amid concerns raised by opposition parties over alleged tampering of EVMs. They have asked the Election Commission to ensure transparency in counting. Election Commission officials said final results are expected only by late evening.

Elections were held in 542 of 543 seats and a party needs 272 seats to form government.

It has been a seven-phase polling from April 11 to May 19 with leaders stomping all over the country, holding rallies and enthusing people to vote.

As many as five exit polls on Sunday projected that the BJP-led National Democratic Alliance was all set to retain power at the Centre, riding yet another ‘Narendra Modi wave’.

This, despite the Congress-led Opposition making frenetic efforts to dent the Modi citadel by raising issues like corruption, unemployment, demonetisation and inflation.

Voting for the marathon seven-phase elections logged a record final turnout of 67.37 per cent in 542 Parliamentary constituencies. There was an increase of 1.3 per cent in overall voting turnout this time. Even Mumbai, known to be a laggard at voting, showcased its best performance in three decades at 55 per cent.

The average turnout over nine phases in 2014 was 66 per cent, the highest ever in the history of Indian general elections. Over 8,000 candidates were in fray this time.

It has been a hotly contested campaign trail, with virulent rhetoric and mudslinging marking speeches.

The ruling BJP-led National Democratic Alliance, particularly top leaders including Prime Minister Narendra Modi, stuck to a robust nationalism script, peddling surgical strikes, national security and an anti-terror, anti-Pakistan stance as the backbone of its campaign. They shredded the Opposition to pieces on issues of corruption and financial improbity. Modi called himself the ‘chowkidar’ of the country.

The Congress-led United Progressive Alliance’s voice was equally stringent, largely concentrating on Modi, his promises and his alleged failures. ‘Chowkidar chor hai’ was Congress boss Rahul Gandhi’s abiding refrain in his speeches, and in one he went overboard and attributed it to the Supreme Court. He had to unconditionally apologise.

The Congress also intermittently flirted with soft Hindutva – saadhus came out in support of Congress candidate and top leader Digvijaya Singh – to offset the aggressive tone on the other side.

This was also the election that saw Priyanka Gandhi end all speculation and jump into the thick of it all, crowned the party’s general secretary and given charge of East Uttar Pradesh.

Regional party chiefs also played a prominent role in the run-up keeping hopes alive of a Third Front — with or without the Congress — if NDA failed to get the numbers.

Over 900 million Indians were eligible to vote in the elections to constitute the 17th Lok Sabha.