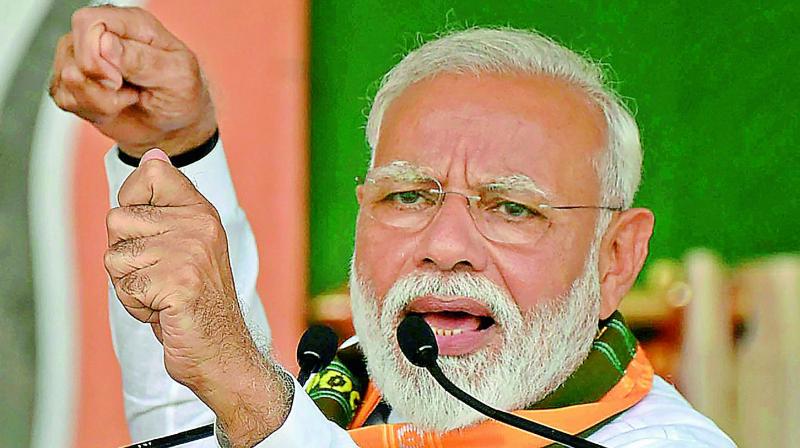 During an interview, Modi said that the Godse remark is absolutely unforgivable and that it insulted Mahatma Gandhi.

“She has apologised. That is a different thing. But in my heart, I cannot forgive her,” said PM Modi.

In an interview to TV channel NEWS 24, Modi said: “Everything that has been said about Godse and Gandhi is horribly wrong and fit to be hated and criticised. Those who say this should think a 100 times in future”.

Reacting to actor-turned-politician Kamal Haasan recent remark that the first terrorist of independent India was a Hindu extremist (Godse), Pragya said: “Godse was, is and will always be a ‘deshbhakt’”.

A chorus of leaders across parties slammed Pragya. The BJP distanced itself from Pragya and two other — Ananth Kumar Hedge and Nalin Kateel — who made similar remarks in support of Godse.

Union Minister Anant Kumar Hegde had tweeted: “Am glad that 7 decades later today’s generation debates in a changed perceptional environment and gives good scope for the condemned to be heard upon. #NathuramGodse would have finally felt happy with this debate!”

Soon after BJP distanced itself from the remarks by the leader, he deleted the tweet and posted: “My Twitter account has been breached twice in the past one week and certain tweets have been posted on my timeline which has been discarded and deleted. Regret the posts attributed to me.”

“Godse killed one, Kasab killed 72, Rajiv Gandhi killed 17,000. You judge who is more cruel in this??” – Nalin Kateel had tweeted amid the raging controversy over Sadhvi Pragya’s comment glorifying Godse as a patriot on Thursday night.

The party high command has come down harshly on these three leaders, who now face disciplinary action.

BJP president Amit Shah said the disciplinary committee will seek an explanation from all the three leaders submit the report to the party within 10 days.

Pragya, however, apologised late on Thursday night and retracted her comment.