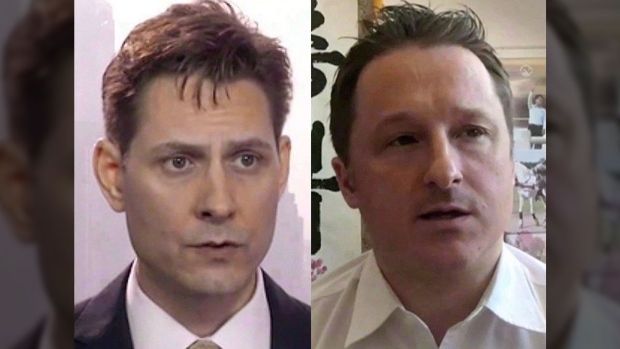 Goodale said the move is an “arbitrary action” and that Canada will continue to demand the appropriate treatment of Michael Kovrig and Michael Spavor.

He says no evidence has been produced to indicate any validity to allegations made against them.

A Chinese foreign-ministry spokesperson said Kovrig and Spavor have been arrested on suspicion of gathering and stealing state secrets for “foreign forces.”

“China has taken compulsory measures on the two Canadians in accordance with law and the Chinese procuratorial organ has lawfully approved their arrest,” Lu Kang said, according to an English statement posted to the ministry’s website. “The actions we have taken are entirely law-based. We hope the Canadian side does not make irresponsible remarks on it.”

He would not say where they are now being held or whether they have seen lawyers.

“Today I can still responsibly reassure you that the Chinese procuratorial organ handles the case in accordance with law. Their lawful rights and interests are fully guaranteed,” Lu said.

Kovrig is a former Canadian diplomat and expert at the International Crisis Group and Spavor is a businessman with lengthy experience in North Korea.

The International Crisis Group said Kovrig, at least, has seen hardly any outsiders since his detention in December.

“Michael has been unjustly detained and has now been unjustly arrested,” the group said in a written statement. “He should be freed immediately. After 158 days of arbitrary detention, Michael still hasn’t been allowed to see his family or a lawyer. His work was completely transparent and out in the open for all to see, including for Chinese officials.”

Both Kovrig and Spavor were arrested on Dec. 10 after a senior executive with Chinese telecom giant Huawei was arrested in Vancouver on Dec. 1 at the request of U.S. authorities, who want her extradited to face fraud charges.

“Canada strongly condemns their arbitrary arrest as we condemned their arbitrary detention on Dec. 10,” Global Affairs spokeswoman Brittany Fletcher said in a statement.

“Canadian consular officials have made recent consular visits to the two men and will continue to provide consular services to them and their families.”

Each man had a visit from Canadian diplomats earlier this week, just prior to the formal arrests. China has permitted such visits about once a month.

In a news conference in Paris, where he’s been attending an international summit, Prime Minister Justin Trudeau spoke gravely but in vague terms about how Canada might respond.

“We continue to take the safety of the Canadians arbitrarily detained in China with the utmost priority,” he said.

Asked what might prompt him to contact China’s President Xi Jinping about the Kovrig and Spavor cases directly, Trudeau said: “What we are always focused on is doing things that are going to help the Canadians being detained, that are in difficulty overseas.”

Since the arrests of Huawei’s Meng Wanzhou in Vancouver and the detentions of Kovrig and Spavor, China has also barred shipments of Canadian canola on the grounds they’re ridden with pests, though Canadian officials say they’ve received no evidence supporting that claim. Administrative restrictions have also impeded imports of Canadian pork, peas and soybeans.

“I think Canadians do understand that China is taking an approach to the system that underlies trading between countries that is not in line with what the majority of western democracies do,” Trudeau said. “We have to stand together to show that we are not going to change our principles or values or the way we behave, particularly when it comes to the independence of our judicial system, because the Chinese government has decided to behave arbitrarily and detain Canadians.”

Canada is also locked in an internal government debate over whether to permit Huawei’s technology to be used in next-generation wireless cellular and data networks, a decision that Trudeau said – as he has before – would not be influenced by politics. Some of Canada’s allies are worried that using Chinese technology in vital communications networks would make the country vulnerable to Chinese espionage.

Huawei, which is not a state-owned enterprise, has insisted that it would not spy for the Chinese government and that the consequences of being caught doing so would be lethal to the company. But Chinese law also requires Chinese companies to co-operate with state security authorities.