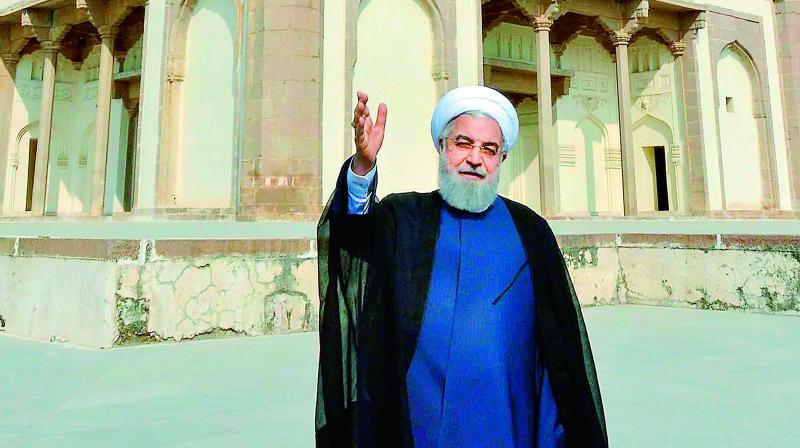 Tehran: Iran has decided to suspend some of its commitments under a landmark 2015 nuclear deal with major powers abandoned by Washington last year, the foreign ministry announced on Wednesday.

“The decision of the high security council to ‘stop acting on some of the Islamic Republic of Iran’s commitments under the JCPOA (nuclear deal)’ was communicated to the heads of state of the countries” still party to the deal — Britain, China, France, Germany and Russia, the ministry said.

It said deputy Deputy Foreign Minister Seyed Abbas Araghchi had handed the decision to the ambassadors of the five countries in a meeting on Wednesday.

The meeting came after US Secretary of State Mike Pompeo accused Iran of planning “imminent” attacks on a hastily organised visit to neighbouring Iraq on Tuesday.

Washington has also deployed an aircraft carrier strike group and several massive, nuclear-capable B-52 bombers to the Middle East as national security adviser John Bolton warned Washington would respond with “unrelenting force” to any attack by Tehran.

Foreign Minister Mohammad Javad Zarif dismissed the US military deployments and stressed that Iran’s actions were not in breach of the nuclear deal it signed with major powers.

“The Islamic republic has seen it suitable to stop acting on some of its commitments and measures it voluntarily undertook” under the nuclear deal, Zarif told state television from Moscow where he is on an official visit.

Emphasising that “Iran will not withdraw” from the deal, Zarif said “this right has been set for Iran in the JCPOA; we are not operating outside of the JCPOA but are in fact working in its framework.”

He said the measures were in line with Sections 26 and 36 of the deal, which allow Iran to cease some or all of its commitments if the United States or other parties fail to adhere to the agreement, including by reimposing sanctions.

The United States reimposed crippling unilateral sanctions last year after withrawing from the agreement, known formally  as the Joint Comprehensive Plan of Action (JCPOA) in May.

Under the deal, Iran agreed to rein in its nuclear activities in return for an easing of sanctions.