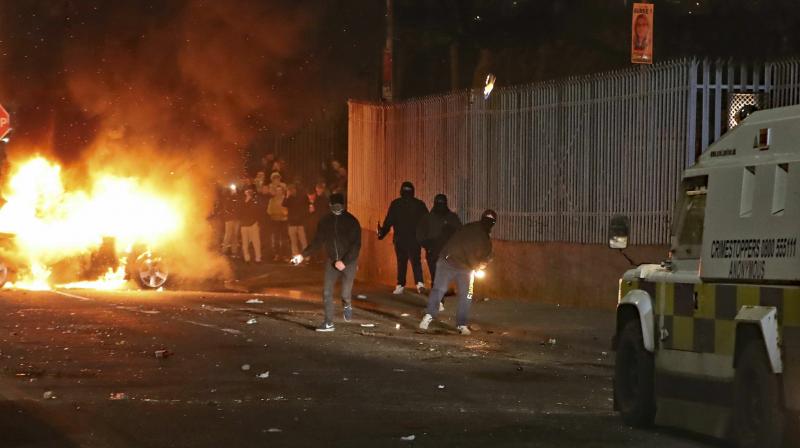 London: A woman has been shot dead during riots in the city of Londonderry in Northern Ireland and the killing is being treated as a terrorist incident, police said Friday, following the latest upsurge in violence to shake the troubled region.

Although the woman had yet to be formally identified, several reporters named her as Lyra McKee, a fellow journalist who had earlier posted an image that appeared to be from the riots in the city, also known as Derry, accompanied by the words “Derry tonight. Absolute madness.”

Images of the unrest posted on social media showed a car and van ablaze and hooded individuals throwing petrol bombs and fireworks at police vehicles.

“Sadly I can confirm that following shots being fired tonight in Creggan, a 29-year-old woman has been killed,” Assistant Chief Constable Mark Hamilton said in a statement on Twitter.

“We are treating this as a terrorist incident and we have launched a murder enquiry.”

It was not immediately clear who had fired the shots that killed the woman, but a leading republican politician blamed “so-called dissidents”.

Journalist Matthew Hughes identified the dead woman as one of his friends, McKee.

“I just received the heartbreaking news that my friend @LyraMcKee was murdered tonight in a terrorist incident in Derry,” he wrote on Twitter.

Leona O’Neill, a reporter with the Belfast Telegraph, said she had been next to the woman when she was shot.

“I was standing beside this young woman when she fell beside a police Land Rover tonight in Creggan #Derry. I called an ambulance for her but police put her in the back of their vehicle and rushed her to hospital where she died. Just 29 years old. Sick to my stomach tonight,” she tweeted.

The violence came in the run-up to the Easter weekend, when Republicans opposed to British presence in Northern Ireland mark the anniversary of a 1916 uprising against British rule.

A car-bombing and the hijacking of two vans in Londonderry earlier this year were also blamed on a dissident paramilitary group.

“My heart goes out to the family of the young woman shot dead by so-called dissidents,” she wrote on Twitter.

Arlene Foster, leader of the Democratic Union Party, which is in favour of Britain’s presence in Northern Ireland, described the death as “heartbreaking news”.

“A senseless act. A family has been torn apart. Those who brought guns onto our streets in the 70s, 80s & 90s were wrong. It is equally wrong in 2019. No one wants to go back,” she wrote on Twitter.

The Good Friday Agreement in 1998 largely brought an end to three decades of sectarian bloodshed in Northern Ireland between republican and unionist paramilitaries, as well as British armed forces, in a period known as “the Troubles”.

Some 3,500 people were killed in the conflict — many at the hands of the Irish Republican Army (IRA).

Police have blamed a group called the New IRA for the flare-up in violence in recent months.

Some have expressed fears that recent attacks could be a sign that paramilitaries are seeking to exploit the current political turbulence over Northern Ireland and its border with the Republic of Ireland caused by Brexit.

Londonderry was the scene of one of the darkest episodes in the Troubles in 1972, known as Bloody Sunday, when British troops opened fire on a civil rights demonstration and killed 13 people. A 14th victim later died of his wounds.

A photograph of a Catholic priest waving a bloodstained handkerchief as he tried to help 17-year-old victim Jackie Duddy to safety became a defining image of the incident.

A former British soldier was charged with murder last month over the killings.

The ex-paratrooper, identified only as Soldier F, is accused of murdering two people and the attempted murder of four others in what was an early turning point in the history of the Troubles.