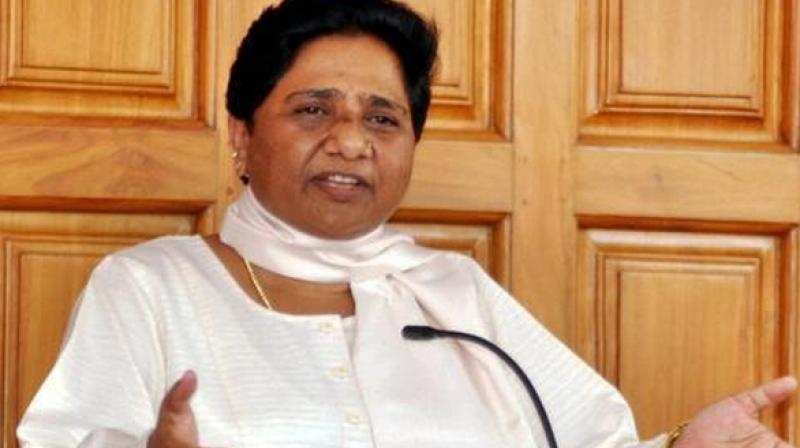 Lucknow: Attacking the Congress government in Rajasthan over its failure to timely act on the rape case in Alwar, the chief of the Bahujan Samaj Party Mayawati said that the state government deliberately suppressed the news as elections were around.

ANI qouted Mayawati as saying, “The Congress government suppressed this incident till the end of election in Rajasthan to preserve their political benefits and threatened the family of the victim to keep quiet about it.”

The case was informed to the police on April 30 but the police didn’t act on the same till May 7 when the first arrest was made.

Mayawati, who had been the Chief Minister of Uttar Pradesh, has demanded the death penalty for the rapists. She wants the Supreme Court to intervene in the matter and bring the state administration to task.

The incident happened on April 26 when the victim, a dalit and her husband were riding on a motorcycle. They were trapped by five other men who led them to a field.

They thrashed the husband and raped the victim. They also robbed the couple of Rs 2,000/-.

The accused, Mukesh Gurjar allegedly filmed the act in his camera. He asked money from the couple for not uploading the clip on social media.

The victim’s husband received a call from the accused asking for money to avoid ciculating the video online. It was then the family decided to file an FIR which they couldn’t do at the Thanagazi police station.

They went to the Alwar SP along with Thanagazi MLA Kanti Prasad. But no FIR was lodged on April 30 or May 1.

The SP directed the local police station following which the local police asked the victim’s husband to stay back as he would have been needed to identify the accused but no arrests were made.

The family had credible information of the accused’s location. But police didn’t take any action citing elections.

The FIR was lodged on May 2. The medical reports were completed on May 2 and 3 but no progress was made.

Following this the video of sexual assault surfaced on social media. The family visited police station but were asked to go to Alwar as policemen were engaged with election duties.

The first arrest was made on May 7, after three days of this episode after elections were conducted in Dausa. The administration blamed elections for the delay in action.

After the matter created huge furore Alwar SP Rajeev Pachar was removed and the local Station House Officer was suspended.

The government has ordered an inquiry by Jaipur Divisional Commissioner.

Rajasthan Chief Minister Ashok Gehlot said the guilty won’t be spared and the state will ensure that the trial is expedited.

However, the BSP supremo was not convinced. She further said that the Congress’ behavior was unlikely to deliver justice. She said, “Our party wants the Supreme Court to conduct the investigation. “

In Congress Ruled Rajasthan for 7 days the cops sat on Dalit gangrape and waited for the polls to end ..

If the same would have happened in a BJP ruled state,the gang of liberals would have unleashed their most scathing attack on Modi

Rajasthan polled in two phases on April 29 and May 06.