Modi hates my family, I will repay him with love: Rahul 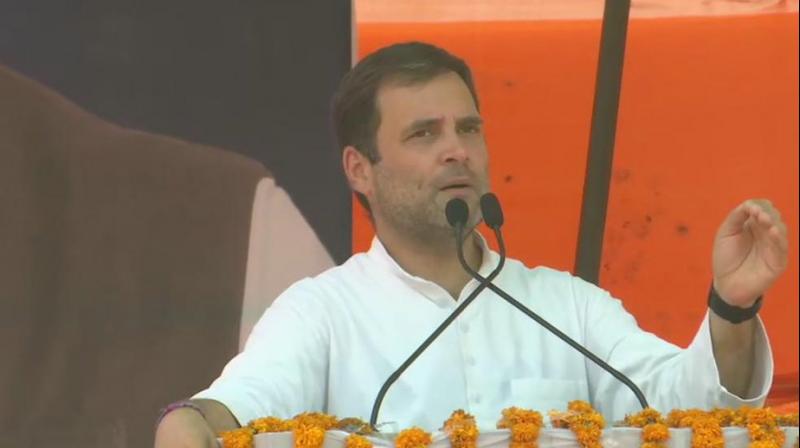 Shimla: Congress president Rahul Gandhi Friday said he will reply with love to prime minister Narendra Modi’s “hatred” towards him and his family.

Addressing a rally in Himachal Pradesh’s Una, he also flayed Modi’s Bharatiya Janata Party government over demonetisation and the implementation of the Goods and Services Tax (GST). “Modi may spread hatred against me and late PMs Indira Gandhi and Rajiv Gandhi, but I will repay with love,” he said.

In the last few days, the Modi has referred to alleged corruption during Rajiv Gandhi’s term as prime minister. The anti-Sikh riots in 1984, around the time Rajiv Gandhi took over as PM, have also figured in his speeches.

The meeting in Una, in support of the party’s Hamirpur candidate Ram Lal Thakur, was the first poll rally addressed by Rahul Gandhi in the state, which goes to the polls in the last phase. In his 25-minute speech, the Congress president said demonetisation had hit people’s lives.

Terming GST as Gabbar Singh Tax, Rahul Gandhi said it destroyed the businesses of many traders. He alleged that the Modi government takes care of only 15 rich families in the country. Gandhi equated politics with ‘kabaddi’ and then said Modi had “slapped” his “coach” L K Advani. The apparent reference was to the alleged sidelining of the party veteran.

He raised the ‘Chowkidar chor hai’ slogan again, accusing Modi of favouring industrialist Anil Ambani in a deal related to the Rafale aircraft contract. The charge has been repeatedly denied by the government. Congress MLA Ram Lal Thakur is pitted against sitting BJP MP Anurag Thakur in Hamirpur.

Voting for the state’s four seats — Shimla (SC), Mandi, Hamirpur and Kangra — will take place on May 19. The Congress chief is scheduled to address two more rallies in the state next week, in Solan for the Shimla Lok Sabha seat and in Mandi.