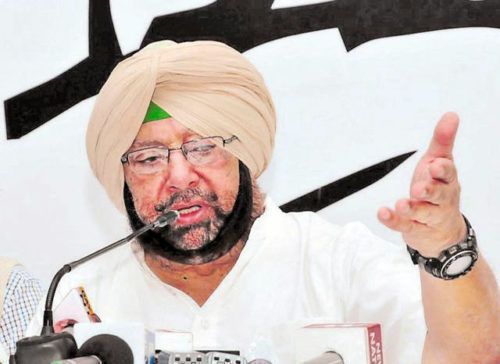 Chandigarh, May 23 : The Modi wave could not have shaken Captain Amarinder Singh’s ship in Punjab.

After thwarting foes within, Congress stalwart and two-time Chief Minister Amarinder Singh, 77, on Thursday is set to lead his party to victory in eight out of 13 Lok Sabha seats in his state.

His wife Preneet Kaur also managed to win the Patiala seat again and that too with a record margin. This is her fourth victory.

For the party’s handsome victory in the northern border state, Amarinder expressed gratitude to the voters and party activists.

Secondly, they say, his shrewd move to put the previous Akali Dal-BJP combine government on the mat by announcing a memorial in Bargari area for those who lost their lives or were injured in the 2015 Behbal Kalan and Kotkapura firing incidents has enabled him to counter Modi’s wave.

Two people were killed and many others injured when police resorted to unprovoked firing on hundreds of people protesting the alleged desecration of the Guru Granth Sahib in Bargari village in Faridkot.

Without missing an opportunity, the Chief Minister kept on reminding voters that sacrilege was another thing altogether in Punjab than the Balakot airstrikes on Pakistani terror camps.

The people of Punjab, or anywhere else for that matter, can never forget an incident of desecration of their holy scriptures. Punjab, in particular, has suffered a great deal at the hands of divisive forces, he told IANS in an interview ahead of polling on May 19.

They do not want communal disharmony, they want to live in peace. Religion is not something they can tolerate anyone playing with or exploiting for political or electoral gains, which the sacrilege cases here were all about, he said.

At election meetings, he struck a cord by saying from the dais: “I am seeing too many ‘faujis’ here. How many of you participated in the 1965 India-Pakistan war?”

Keeping his humorous side alive, Amarinder, who had served as an army captain during the war and often greets his contemporaries by saluting them, did not miss an opportunity to remind the gathering that BJP candidate from Gurdaspur and actor-turned-politician Sunny Deol was a “filmy fauji while I am a real fauji.”

Without mincing words, he often addressed Modi as a self-obsessed man.

The Chief Minister drew a sharp contrast between Modi’s handling of the Balakot strikes and Indira Gandhi’s achievement in splitting Pakistan to create Bangladesh during the 1971 war.

“In Punjab, which has a large number of its sons in the armed forces, this attempt by Modi to take credit for the strikes and invoke the Pulwama martyrs for votes has not gone down well at all with the people,” he said.

“They know Modi and the BJP had no role to play in the courageous act — which was the work of the Indian Air Force. What did Modi do? Just give the orders sitting in a conference room at PMO (Prime Minister’s Office)? Any PM would have done the same, as I have maintained all along.”

For Amarinder, who resigned as a Congress MP and left the party in 1984 to protest against Operation Bluestar and returned to the party in 1997, the 1984 anti-Sikh riots were a national tragedy and Congress leader Sam Pitroda’s remarks that “what happened just happened (in 1984)” were “shameful and unpardonable”.

Describing the 1984 riots a national tragedy, he told the electorate that it cannot be wished or washed away by Pitroda or anyone else.

“And as Rahul Gandhi has also said, those who perpetrated the violence should and will be punished. But if Modi thinks the remarks of Pitroda are enough to make the people of Punjab make this an election issue, forgetting their suffering at the hands of his government, he is totally mistaken.”

The way Amarinder handled the issue of the 1984 riots, which was close to the hearts of all Sikhs, with his sharp acumen and also responded to Modi by condemning it publically and vocally, helped counter of polarisation of votes, an observer told IANS.

At the same time, local concerns remained in the limelight in the election meetings of Amarinder who fought the 2014 Lok Sabha election from Amritsar and drubbed senior BJP leader Arun Jaitley by a margin of more than one lakh votes.

In the 2014 Lok Sabha election, the Akali Dal-BJP combine won five seats (four to Akali Dal, one to BJP), while the Congress and the AAP won four seats each.