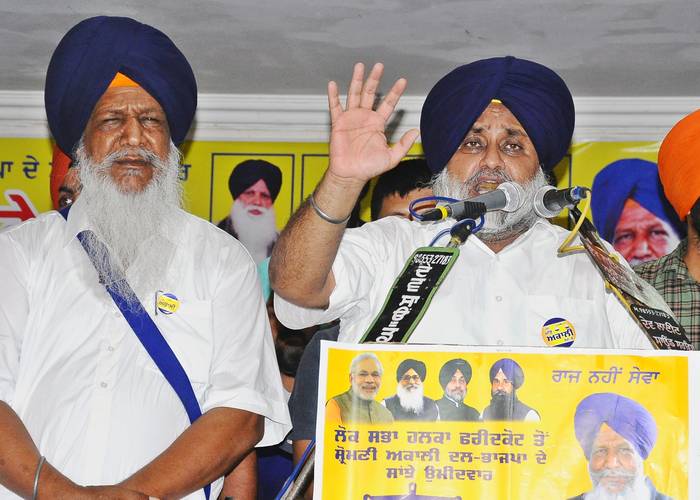 “Amarinder running away from facing people on governance ” Sukhbir

Mr Badal said that Amarinder was using the sacrilege issue merely to divert attention from his utter failure as CM. He said that the Punjab CM was running away from issues of development, good governance and people’s welfare though these were the only tasks on which he should seek votes. But He lacks the courage to seek a vote on his performance. “

Turning to issues of governance, Mr Badal said that transforming the face of rural Punjab and further upgradation of urban areas would be the top priority of his party when it forms the next government in Punjab. “And that may be sooner than Congress thinks. And before that, we will use our clout in the government of India to secure central projects and schemes for modernising Punjab,” said the Akali chief adding “when we are back in saddle, all 12500 villages in Punjab will have basic amenities like water supply , concrete streets, street lights and sewerage at par with cities.”

Addressing massive election rallies today, the former Deputy Chief Minister said that the Chief Minister had gone back on all the promises that he had made holding the holy Gutka Sahib in his hand and taking an oath on Guru Gobind Singh ji. ” Today he is not heard talking about complete waiver of farmers debt , jobs to every household, allowance of Rs 2500 per month to every unemployed youth , free power up to 400 units to Dalits anc poor , pension of Rs 2500, Rs 10 lakh and a govt job to at least one member of every suicide stricken farmers family, sugar and tea along with atta daal to the poor and so on.

On the contrary, said Mr Badal, Captain had used the false excuse of empty coffers and stopped all the people friendly schemes of the SAD BJP government. ” Rs 1500 crores worth of welfare pensions, Rs 200 crores worth of Shagun , all SC scholarships etc have been stopped. More than 800 schools have been closed, most quality education schools for poor meritorious students have been shut down as have been suvidha centres in areas. “He is the most incompetent CM in the country today,” concluded Mr Badal