SP-BSP hugging each other to save themselves: PM Modi 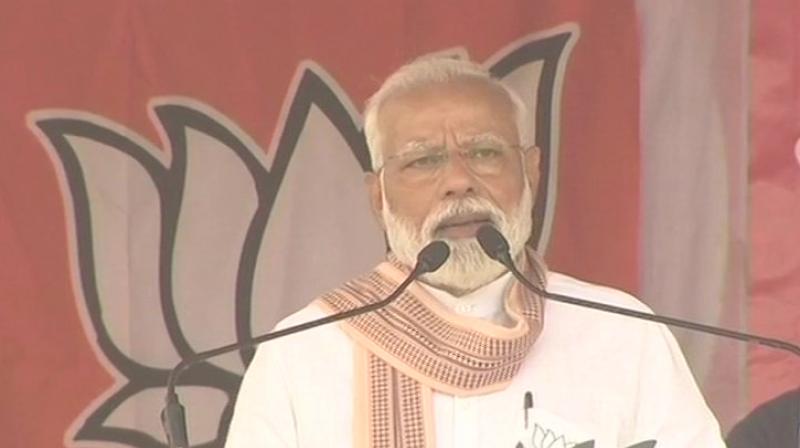 Sonbhadra: Attacking SP-BSP chiefs who have got together in an alliance in Uttar Pradesh, Prime Minister Modi on Saturday said that those who wanted to send each other to jail were now contesting the elections in an alliance to save themselves from getting destroyed.

“SP-BSP, who first ruined UP, are now hugging each other to save themselves from falling apart. Those who wanted to send each other to jail now want to send them to the palace today. The leaders of SP and BSP do not tell people what is their policy for the nation. Whatever they talk about, abusing Modi is at the top of it,” the Prime Minister said while addressing an election rally here.

“What will be their strategy to deal with terrorism, Naamdar, Behen ji and Babuaji will not speak anything about this,” he said.

Arch-rivals in Uttar Pradesh, the SP and BSP have forged an alliance after the BJP swept Lok Polls in 2014 and registered landslide victory in Assembly elections of 2017.

Reiterating his poll campaign of ‘helpless government’ against ‘strong government’, Modi said that whenever there is a coalition government at the Centre then national security is at stake.

“When there is an adulterated government at the Centre, then national security is put at stake. When there was a third front government, Samajwadi party was in the cabinet. What had they done to the country?” he said.

“Many people have written about this before. They have said that the adulterated government had destroyed had intelligence system. The country has to suffer for that. What third front government had done is nothing less than crime,” the Prime Minister said.

Calling the UPA government, which was in power from 2004 to 2014 as “remote-control’ government, Modi also attacked the previous government on issues of corruption and inflation.

“The country was surrounded by scandals. The name of the country was disgraced all over the world, but he would say, ‘hua toh hua’. The agents have captured the government but the remote-control government was unable to take big decisions and but they said ‘hua toh hua’,” the Prime Minister said.

“Now they have also started asking the caste of Modi. The caste of this country’s poor is my caste,” he said.

The Prime Minister further said that the conditions of the farmers would have been different had Sardar Patel become the first prime minister of the country.

“It is the habit of adulterated people to oppose every effort of development. They have mocked us on schemes like Jan Dhan Yojana, Swachh Bharat Abhiyan, Health-related schemes, housing scheme and have tried to stop works related to poor,” he said.

“If Sardar Patel would have been the Prime Minister of the country, the situation of the farmers of the country would be different. We created Gujarat’s highest statue of Sardar Patel, then these people started protesting against him too,” Modi said.

The Prime Minister also underlined that India had tested its first nuclear test on this day 21 years ago.

“21 years back on this day, India successfully carried out nuclear test – operation Shakti. I salute scientists who brought laurels to the country with hardwork. This historical incident in 1998 proves what strong political willpower can do for national security,” he said.