Akhilesh slams Yogi, his ‘thokniti’, says will search for your ‘chillam’ 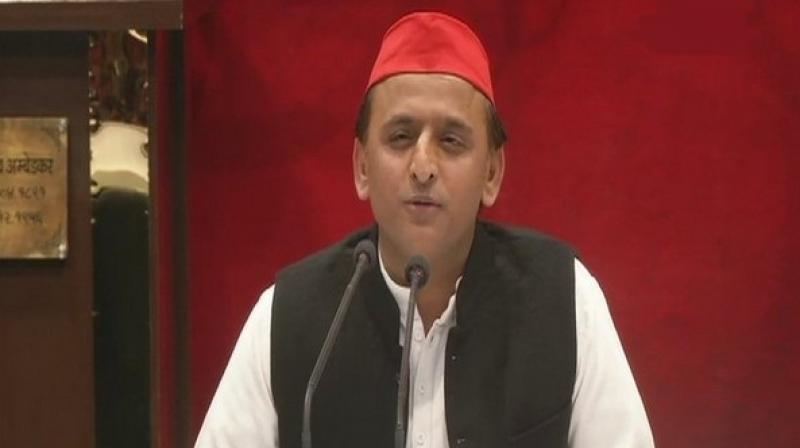 Deoria: With Yogi Adityanath’s lookalike by his side, Samajwadi Party leader Akhilesh Yadav on Saturday attacked the Uttar Pradesh Chief Minister over his ‘thokniti’ (encounter policy).

Taking a jibe at the BJP leader, Akhilesh Yadav said that he will direct the same officers, who searched for faucets at his official residence, to look out for ‘chillam’ (tobacco pipes) when SP-BSP alliance comes to power.

“We distributed the world’s best laptops, why will we steal faucets? People are still using those laptops, they are working well. The government is not permanent for anyone. In the coming time, if the people will give us a chance, then the same officers, who searched for faucets, will look out for ‘chillam’ (tobacco pipe). If they can find faucets, then we Samajwadi people will work towards finding their ‘chillam’,” Akhilesh said while addressing a rally here.

Suresh Thakur alias Yodha, a lookalike of Yogi Adityanath, was also present at the rally.

“We cannot bring fake God, but have brought a baba,” Akhilesh said while introducing Thakur to the crowd.

“There are people who use encounter policy in the state… That’s why we say that we have to remove not only the ‘Chowkidar’ (Prime Minister Narendra Modi) but also the ‘thokidaar’ (Yogi Adityanath),” he added.

The former Uttar Pradesh chief minister further criticised Modi and BJP over the cancellation his party’s Varanasi candidate Tej Bahadur Yadav from Varanasi. “The government claims that it wants to end terrorism but it was afraid of a jawan,” he said.

On May 1, the candidature of Yadav, a former BSF jawan, was rejected by the returning officer after he failed to submit a certificate on whether or not he was dismissed from the service for corruption or disloyalty to the government.

Taking about the SP-BSP alliance, Akhilesh said, “The information being received from the first five phases is that those who started the Swachh Bharat mission will be cleared off from the state by people of Uttar Pradesh.”

“The seventh phases of the Lok Sabha elections belong to the SP-BSP alliance. We don’t think they will be able to open their account anywhere,” Akhilesh asserted.

Yogi Adityanath also took a swipe at the SP-BSP alliance on Twitter and indirectly likened Akhilesh to Aurangzeb.

“They have joined hands with the one who dethroned his father like Aurangzeb. After May 23, these people will continue abusing each other. The behaviour of these ‘mamhamilavati’ is similar to how a scorpion, frog and snake come together during a flood,” Adityanath tweeted.